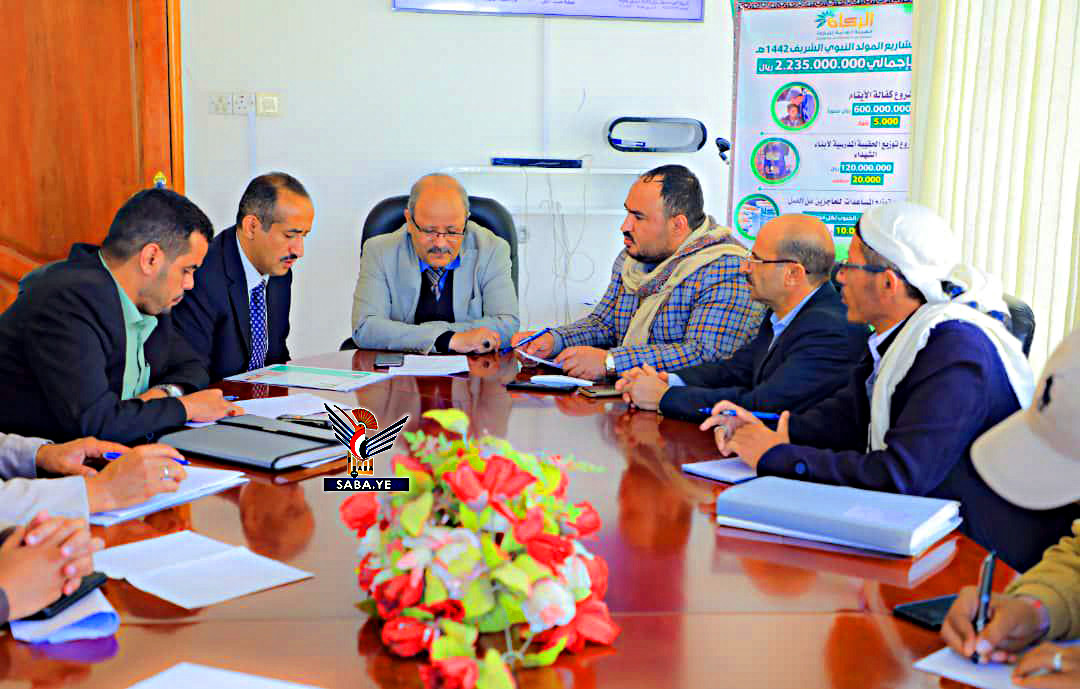 A meeting in Sana’a today, chaired by a member of the Supreme Political Council, Muhammad Saleh Al-Nuaimi, which included the Chairman of the General Authority for Zakat, Sheikh Shamsan Abu Nashtan, discussed issues related to the tasks and activities of the National Network for Social Solidarity.

The meeting, in the presence of the Secretary of the Supreme Political Council, Acting Head of the Technical Unit at the Presidency Office for monitoring and evaluation of the implementation of the National Vision, Dr. Yasser Al-Houri, and the Deputy for the Zakat Authority for the Resources Sector, Dr. Ali Al-Ahnoumi and the Information Sector, Mujahid Al-Nusra and the Undersecretary of the Ministry of Local Administration, Ammar Al-Harib, touched on the reliable role of the Zakat Authority Local and social affairs within the framework of the recently established National Network for Social Solidarity.

The meeting stressed the importance of working for the success of the national network of social solidarity through the partnership between the government, the private sector and civil society.

The meeting stopped in front of the relevant projects undertaken by the Zakat Authority to achieve social solidarity at the level of the Republic and benefit from its experiences in the field of community partnership at the level of governorates, districts, villages and segregation.

The member of the Supreme Political Council praised the achievements of the General Authority for Zakat during the past period and its prominent role in achieving social solidarity according to Sharia banks.

He pointed to the keenness of the National Network for Social Solidarity to establish an accurate and organized database for the beneficiaries throughout the governorates of the Republic by uniting efforts across the concerned authorities, including the Zakat Authority and the Ministry of Local Administration.

Al-Nuaimi pointed out the tasks of the National Social Solidarity Network joint with the General Authority for Zakat, which aims to convert the needy into producers by employing the capabilities and infrastructure to enable them economically to strengthen the pillars of local industry across the private sector.

While Sheikh Shamsan Abu Nashtan emphasized, the Zakat Authority was keen to have an effective partnership in society through the private sector, society and state institutions.

He reviewed the Zakat Authority’s plan during the next year in the field of community partnership, strengthening social solidarity, expanding business and quality projects targeting those entitled to zakat in all eight banks, as well as the achievements made during the past period.

In turn, Dr. Yasser Al-Houri praised the achievements of the leaders and cadres of the Zakat Authority, the last of which was the organization of a collective wedding festival for 3300 brides and grooms .. Pointing out that the Zakat Authority topped the list of state institutions through evaluation and follow-up of achievements in a record time, which calls for pride because it was established recently.

He stressed the importance of reflecting the aspirations of the revolutionary leadership and the Supreme Political Council in achieving social solidarity, by uniting efforts and strengthening the partnership between the state, the private sector and urban society.

The meeting was attended by the Director General of Community Partnerships at the Zakat Authority, may God preserve Zayed and planning, Ali Al-Hamli, and the head of the Authority’s health committee, Dr. Hassan Tamah.